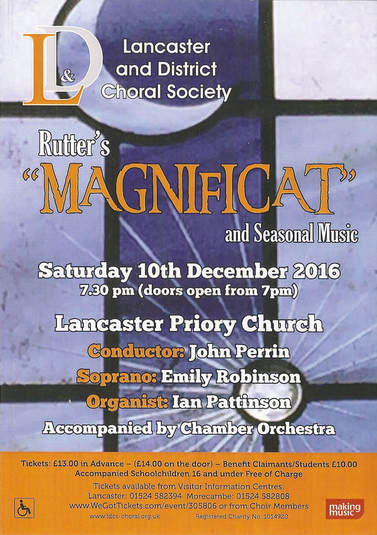 John Rutter wrote his Magnificat in 1990' and it had its premiere the same year at Carnegie Hall, New York under the direction of the composer. 'Magnificat' refers to the passage in St Luke (chapter 1, verses 46-55), recording the Virgin Mary's outpouring of joy, praise and trust in God following the Annunciation - the Angel's word that she was to give birth to Christ. This song of Mary has been a central part of the observance of Advent since early times, and its well-loved familiarity also derives from its inclusion as a canticle in the Catholic office of Vespers and in Anglican Evensong.

​Many well-known composers have set the text to music, including Dufay, Palestrina, Purcell, Charpentier and J S Bach. Rutter's starting point was the feast days of the Virgin as observed in countries such as Spain, Mexico and Puerto Rico. Here people take to the streets with singing, dancing and processions and it was this joyous atmosphere of outdoor celebration that the composer wanted to capture in his music. Although his compositions have an apparent simplicity, Rutter's style also draws on the melodies and harmonies of such composers as Faure and Durufle, and his simple musical line does not preclude occasional complex interweaving of themes, voices and texts.

Rutter's Magnificat is in seven sections with several additions to the original liturgical text. The second section is a setting of the lovely fifteenth century poem 'Of a Rose, a lovely Rose'; the third section, 'Quia fecit mihi magna', concludes with a 'Sanctus' derived from the Ordinary of the Mass and sung to the Gregorian chant of Missa cum jubilo; the final section Gloria Patri, includes the prayer 'Sancta Maria', an antiphon used at the feast of the Virgin Mary, but sung here by a lone soprano. The Choir concludes the work with the final Magnificat text 'As it was in the beginning, is now and ever shall be, world without end. Amen'. 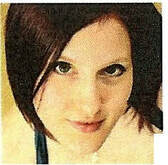 ​Soprano - Emily Robinson
Emily has long been an active member of the musical community and a familiar voice to festival choruses and choirs in the South Lakes area. With a repertoire spanning the musical spectrum from Baroque to Britten, Monteverdi to Modern, she sings Bernstein and Gilbert & Sullivan or Mozart and Handel with equal gusto.