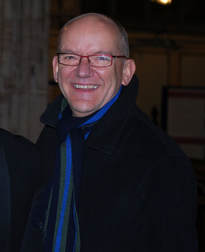 Bob Chilcott
A Little Jazz Mass by Bob Chilcott (1955-)
Born in Plymouth, Bob Chilcott has been involved with choral music all his life, first as a chorister then a Choral Scholar at King's College, Cambridge. Later he sang and composed music for 12 years with the King's Singers and also acted as arranger for the BBC Radio Orchestra. These experiences, combined with a passionate commitment to young and amateur choirs and a belief in the power of music to unite people, inspired Chilcott to compose full-time and through his workshop activities to promote choral music worldwide.

A Little Jazz Mass, originally written for children's voices and premiered in New Orleans in 2004, is a jazz setting of the Latin Missa brevis. The five movements embrace a variety of jazz styles from the groovy Kyrie, the swinging Gloria, the laid-back Sanctus, the humming Benedictus and the blues Agnus Dei. In true jazz style, whether the accompaniment is simply a piano or a more ambitious combo of varied instruments including percussion, Chilcott positively encourages improvisations: the result is a beautiful, original and soulful musical experience.

Carmina Burana by Carl Orff (1895-1982)
An original, ambitious and prolific composer, Carl Orff is today remembered only for his contribution to music education and for his one-dimensional ​words and theatre from an early age. He had music lessons, some guidance and study in composition but was essentially self-taught. Reacting strongly against the excesses of the late Romantic music, Orff favoured late Renaissance and early Baroque, particularly Byrd and Monteverdi, but was also heavily influenced by Stravinsky, Schoenberg and African music - a heady mixture! A gifted vocal coach and conductor, Orff had strong ideas on 'music for the people' and the essence of his philosophy can be heard in Carmina Burana with its simple insistent rhythms - reinforced by every imaginable percussion instrument! - direct melodic lines and uncomplicated harmonies.

The same simplicity is replicated in Orff's lyrics which he extracted from a medieval collection of songs and poems, Carmina Burana (Songs of Bavaria ), written by wandering students and clerics who enjoyed life to the full! The rhymed lyrics are primarily in Latin, High German and Old Provencal, the language of courtly love, and Orff organised 24 of the poems into a libretto. Dancing, drinking, sex, food, gambling and the joys of spring are integral to the texts Orff chose for the work which is distinctly worldly!

It is a challenge for singers. All three soloists are required to sing extremely high notes, the baritone and tenor singing falsetto. The enhanced percussion section provides the rhythmic backbone to a work of drama, excitement and contrasts. The simple repetitive melodies are hypnotic and infectious and one is swept along by the insistent rhythms and the splendid sounds. Orff seems to have a remarkable gift for writing tunes that sound as though they have always been there!

The bitter meditation, 0 Fortuna, forms a massive structural pillar at the beginning and end of the work with percussive staccato singing slowly building in speed and volume over 100 bars. Within this framework, the poems are grouped in three chapters. A decidedly profane work, Carmina Burana conjures up bawdy images of monks having a good time in the local tavern and young lovers doing what comes naturally. The Abbot proclaims his gambling prowess and the male chorus plunges into a whirl of toasts and drinking. The roasted swan sings from the spit and a young girl offers her all to her sweetheart. Meanwhile the wheel of fate turns and Fortune, empress of the world, does her best to get in the way of those having fun.
Performers

​Tenor - Matthew Minter - was born in 1972 and was educated at The Windsor Boys' School. At the age of 15 he became the youngest member of the National Youth Choir of Great Britain. He studied music at Salford University and as a postgraduate at the Royal Northern College of Music. Matthew sings regularly with The BBC Singers, with whom he made his debut at the Proms during the 2001 season. Apart from work with the BBC, Matthew has appeared most recently with Tenebrae. Forthcoming engagements include Stainer's The Crucifixion, Handel's Messiah, Britten's Serenade for Tenor & Horn, and the role of Evangelist in Bach's St.Matthew Passion.
​

​Bass - Andrew Mayor - was born in Manchester, and won a postgraduate scholarship to the Royal Academy of Music. During his studies he sang Borilee in Rameau's Les Boreades, conducted by Roger Norrington. At the 2002 Osterfestpiele in Salzburg Andrew was a soloist in Beethoven's Choral Fantasia with the Berlin Philharmonic Orchestra conducted by Claudio Abbado. Other recent roles include Silvio I Pagliacci for Castleward Opera, The Vicar (Albert Herring), Masetto (Don Giovanni) and Ford (Falstaft), for English Touring Opera, the Count (Le Nozze di Figaro), Rigoletto, Eugene Onegin and Renato in Un Ballo in Maschera all at the Holland Park Festival.
​
Percussion
Richard Charles
Abigail Flood
William Minty
Simone Rebello
Sophie Turnbull
AlexWalker