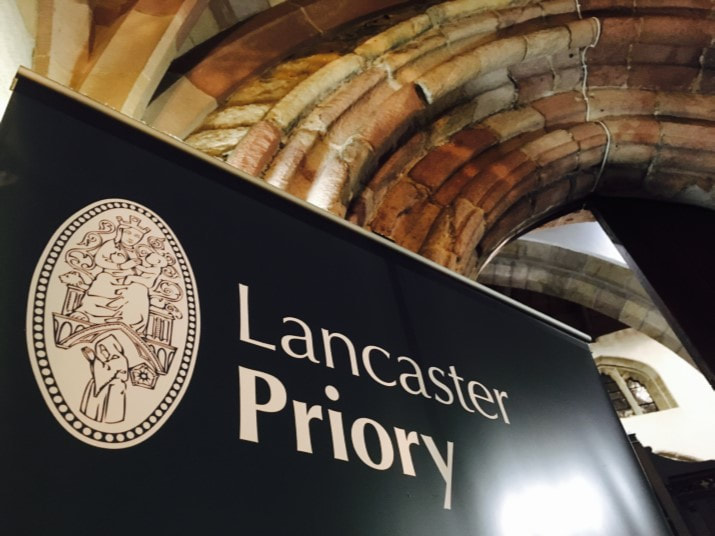 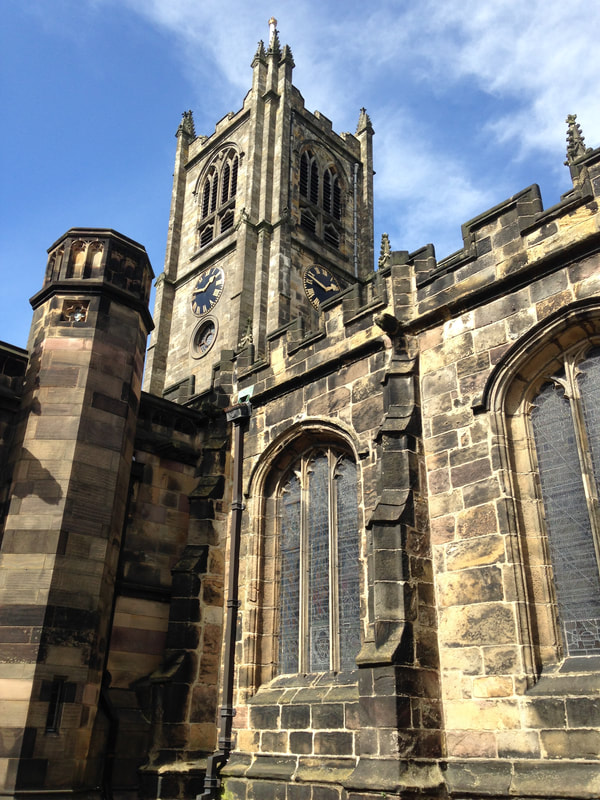 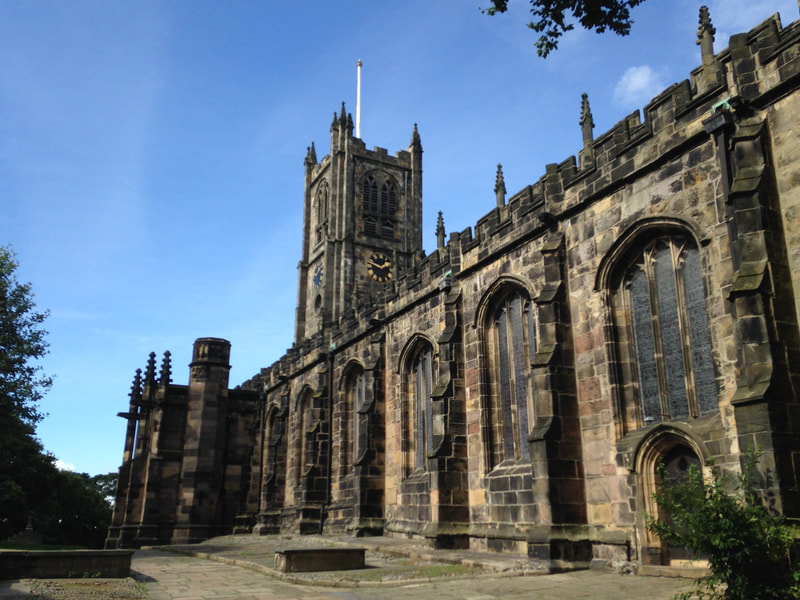 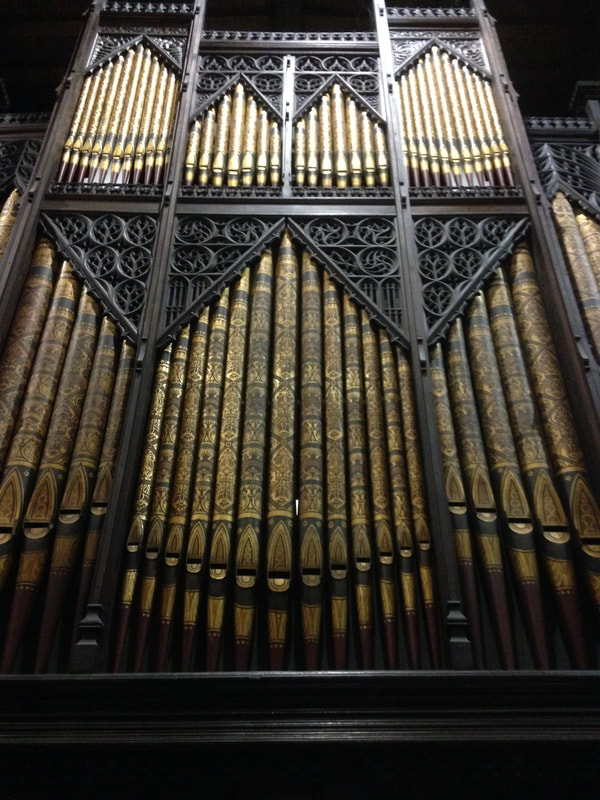 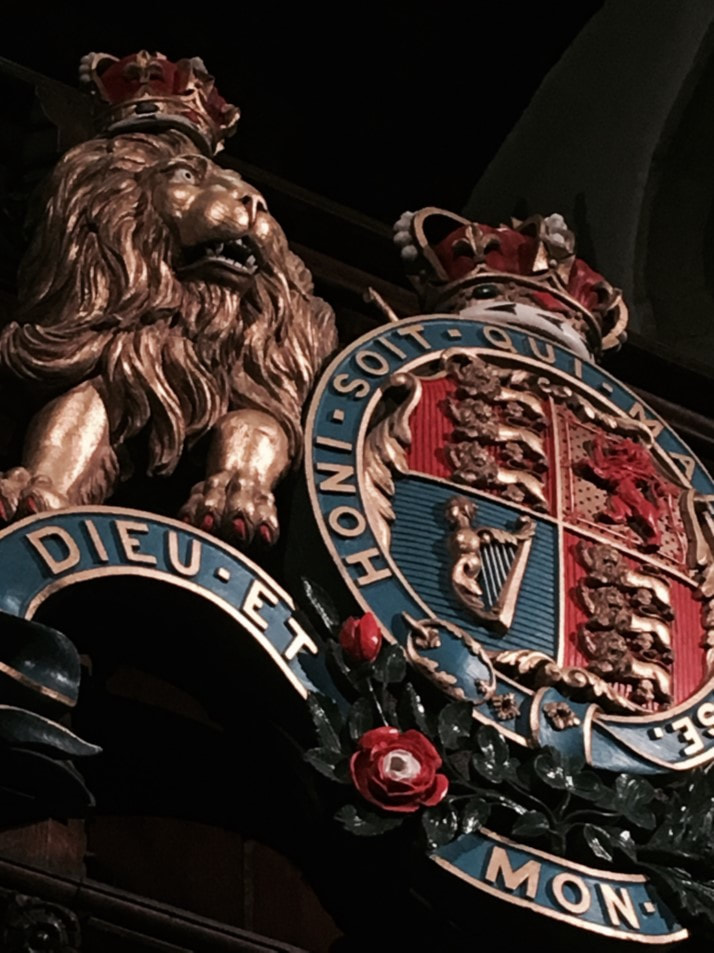 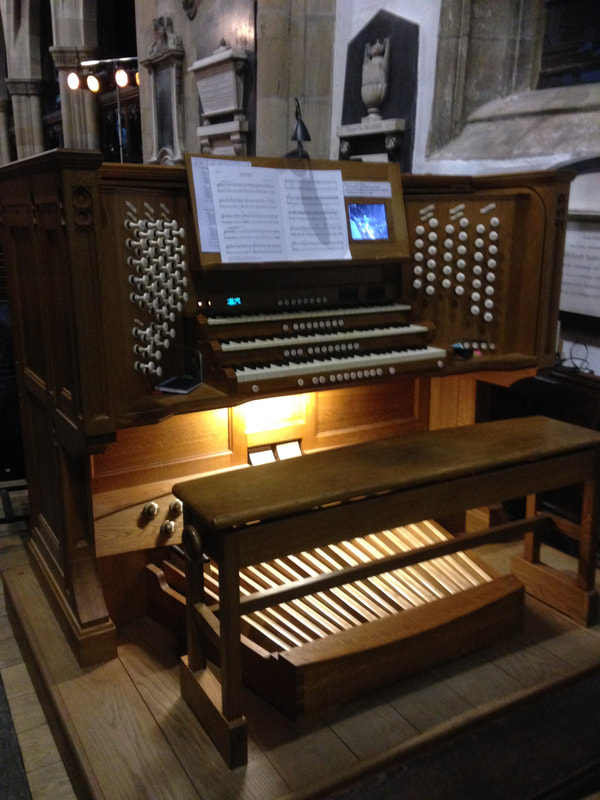 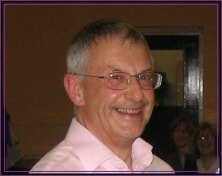 John Perrin - Musical Director - trained at the Birmingham School of Music and Bretton Hall College of Education and has ABSM(Gen Mus), ABSM (Org Teacher), ARCM (Org Pert) and Cert Ed qualifications He has had successful experience as a Head of Music in large secondary schools and as a Musical Director. He has trained many types of choirs of all ages and styles, and directed a wide range of musicals and operettas. 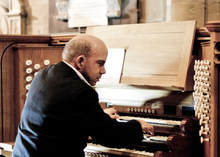 lan Pattinson - Organist - holds an honours degree and a Postgraduate Diploma in organ performance from Birmingham Conservatoire, and became a Fellow of the Royal College of Organists in 2002. lan has been organist at Lancaster Priory from 2001, having previously held positions as organ scholar at Birmingham Cathedral and assistant organist at Blackburn Cathedral. 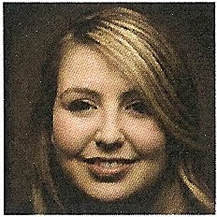 Juliet Montgomery - Soprano - Juliet has recently graduated with a MMus from the Royal Northern College of Music. She has already performed in numerous opera productions in the Northwest and as an Oratorio soloist singing works by Haydn, Rossini, Faure, Goodall, Brahm's Requiem, Bach and Handel. Juliet Montgomery appears by kind permission of the RNCM. 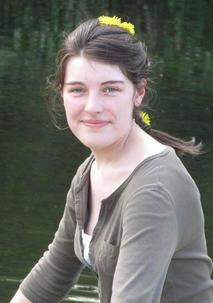 Rebecca Chandler - Mezzo soprano - Rebecca is currently on a gap year, aiming to go to a Conservatoire to train as a mezzo soprano. In the meantime she is trying to gain as much singing experience as she can. Her first leading performance was Schubert's Mass in G, which she sung with the Stavely Choral Society, with whom she sings frequently. She has previously performed "The Armed Man" with the Lancaster and District Choral Society. 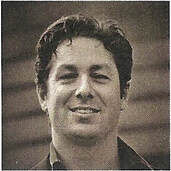 Christopher Steele - Tenor - studied at RCM and NOS and sang as a principal artist for most of the UK's leading opera companies and in oratorio in many of the country's largest venues. Christopher now teaches voice at Sedbergh School and Lancaster Royal Grammar School and for Lancaster Priory. He performs regularly in oratorio in the north of England and enjoys giving recitals of classical art song and leading pedagogical choral workshops. 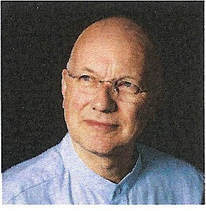 John Anthony Cunningham - Bass Baritone - a Lancastrian, has sung with English National Opera and Opera North in many diverse roles. His career has taken him to the Metropolitan Opera (New York), the Bolshoi (Moscow) and theatres throughout the UK. In 2010 John made his debut as a principal guest artist at the Royal Opera House, Covent Garden, and he has appeared there regularly ever since. John performs frequently on the concert platform in oratorio and is very happy to return to Lancaster. 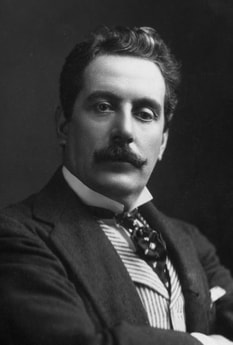 Giacomo Puccini
Messa di Gloria : Giacomo Puccini (1858-1924)
Giacomo Puccini, the last great exponent of Italian Romantic opera, is renowned as the composer of such works as La Boheme, Tosca and Madame Butterfly, which are still hugely popular with opera audiences and performers alike. However, Puccini was born into a dynasty of church musicians who since the eighteenth century had been organists at the church of San Martino in Lucca. He was set to follow the family tradition but in 1876, after seeing a performance of Verdi's Aida at Pisa, he decided to become an opera composer.

In 1880, at the age of 21, Puccini completed his studies at Lucca. He wrote the Messa di Gloria as his graduation thesis and also as a tribute to his family, who had specialised in sacred music for four generations. Although it was praised by the critics, the Messa di Gloria fell into obscurity until an American priest rediscovered it in the 1950s, during research for a biography of the composer. The Messa di Gloria is in five sections and the young Puccini used dramatic contrast, intensity of feeling and lyricism to great effect in the work. The Kyrie contains a dramatic succession of four entries in the Christe eleison, whilst the longest Gloria section contains a jubilant choir, trumpet calls, an operatic tenor solo, a fugue and generous use of bass voices and brass worthy of Verdi. By contrast, the powerful Credo has a tenor solo, accompanied only by the Choir, before the mood darkens then returns, heralded by trumpets, to optimism and joy. The tender and rejoicing Sanctus, with its baritone solo, gives way to the Agnus Dei which Puccini later transformed into a madrigal for Act 2 of his opera Manon Lescaut. A tenor solo is succeeded by a baritone solo, before the two join together, in music again reminiscent of Verdi, and the choir quietly echoes 'Dona pacem'.
​ 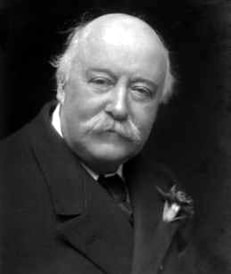 Hubert Parry
​​Blest Pair of Sirens & I was Glad: Hubert Parry (1848-1918)
In his centenary year Sir Hubert Parry - composer, teacher and music historian - is still mainly remembered as the composer of Jerusalem. However, he held music professorships at both the Royal College of Music and Oxford University and wrote several books about music and music history, leaving limited time for composition.

​During his lifetime, and afterwards, his reputation and critical standing have varied; Stanford rated Parry as the finest English composer since Purcell, whilst Delius did not agree! However, he certainly had a great influence on later composers; amongst his students at RCM were Ralph Vaughan WilIiams and Gustav Hoist whilst Elgar learned much of his craft from Parry's articles in Groves Dictionary of Music.

Blest Pair of Sirens was first performed in London in 1887 by the Bach Choir of which Parry was a member. Conducted by Stanford, who also commissioned the work, it is a setting of John Milton's ode 'At a solemn Musick' which Parry left unchanged, except for modernising the poet's 17th century spelling. It was an immediate success; taken up by other choirs ever since, the work featured recently at the 2011 wedding of the Duke and Duchess of Cambridge, sung by the choirs of Westminster Abbey and the Chapel Royal.

I was Glad, composed in 1902 for the coronation of Edward VII, has been performed at all subsequent British coronations and is sung on the arrival of the sovereign at Westminster Abbey. Parry's setting is a large-scale and grand work with full choir, creating an atmosphere of awe, dignity and celebration appropriate to the crowning of a monarch.
​ 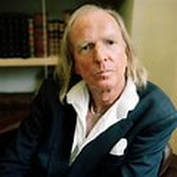 John Tavener
Song for Athene : John Tavener (1944-2013)
Converting to the Eastern Orthodox Church in 1977, English composer John Tavener's work - sometimes described as holy minimalism - is predominantly religious and contemplative music where orthodox theology, liturgical traditions and mysticism are major influences. Commissioned by the BBC, the piece was written in 1993 as a tribute to Athene Hariades, a young family friend killed in a cycling accident. The song combines words from the Orthodox funeral service and Shakespeare's Hamlet, put together by Mother Thekla, a nun at the Orthodox Monastery at Whitby. Also known as Alleluia: May Flights of Angels Sing Thee to thy Rest, this haunting work was sung at the funeral of Princess Diana in 1997, as her cortege departed from Westminster Abbey.
​ 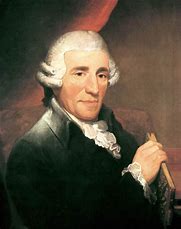 Joseph Haydon
Missa Sancti Nicolai: Joseph Haydn (1732-1809)
1772 was a difficult year for Joseph Haydn and his patron, Prince Nikolaus Esterhazy, as they struggled with disgruntled musicians and financial cuts. After many years spent mainly at the isolated summer palace, the court musicians were desperate to be nearer their families in Vienna and asked Haydn to intercede with the Prince.

The composer's witty response was to write the Farewell Symphony in which one by one the musicians left the stage, packing up their instruments and blowing out the candles, until only two violins were left playing! The Prince took the hint, the court returned to Eisenstadt in November and it is thought that Haydn composed the Missa Sancti Nicolai not only for the Prince's nameday on 6 December but also to thank him for the return.

The mass is on a larger scale than other missae breves and in the orchestral version the strings are joined by two oboes, two horns and a bassoon: in 1802 a revised version authorised by Haydn added trumpet and timpani. At the very beginning of the Kyrie the pastoral character which distinguishes this work is established. Pastoral masses are associated with Advent, depicting the birth of Christ in a stable, shepherds in the fields and connected images.

Characteristically written in the key of G major, the mass is designed to provide comfort with simple melodies and repeats. The closing movement, Dona nobis pacem, is a reprise of the Kyrie and both are written in 6/4 time, an unusual metre in the classical period, creating lilting rhythms and a strong impression of gentle joyfulness.

​Concert in Lancaster Priory 8th December 2018
GLORIA
"This was a well-named title for glorious music ably performed by LDCS on Saturday evening, under the energetic direction of John Perrin and with the expertise of Ian Pattinson, the Priory Organist, who managed to produce lovely orchestral sounds and colours from the magnificent Priory organ.

The concert opened with Puccini's “Messa di Gloria”. This was written when Puccini was 21 and is very operatic in style. It is set for choir with a solo tenor and solo bass. The soloists Christopher Steele and John Anthony Cunningham matched the rich operatic quality needed and blended well together.

This was followed by one of the evening's works by Parry - “Blest Pair of Sirens”. The choir were singing this to mark the centenary of Parry's death in 1918. In this the organ accompaniment plays a very important part. The choir sang with gusto.

After the interval the main work was Haydn's Saint Nicholas Mass and we were treated to more music by Parry (later in the concert). Before these we heard John Taverner's “Song for Athene” which gave us contemplative unaccompanied music and a change in texture. The choir had intonation problems in this work and were very much happier singing with an accompaniment as in the other works.

Haydn's sunny Saint Nicholas Mass introduced us to the solo soprano (Juliet Montgomery) and solo alto (Rebecca Chandler). These voices sing sections of the work in quartet settings with the tenor and bass. This work was an appropriate choice as it is a Mass written for the season of Advent, 6th December being Saint Nicholas Day.

As this work is primarily written for orchestral accompaniment, the organ had to skilfully reproduce the quality of orchestral sounds, which Ian Pattinson managed very well.

The evening finished with Parry's famous “I was Glad.”
​
In spite of a long concert, with masses of work for the choir, the forces managed to maintain the momentum throughout and obviously enjoyed themselves."

Margaret (a graduate of the Royal Manchester College, now the Royal Northern College of Music) is one of the region's best-known musical figures. She was director of the Cumbrian Baroque Choir and has spent her life teaching, singing as a soloist, and inspiring and encouraging others to sing. She particularly enjoys singing in ensembles, large or small, with like-minded musicians. 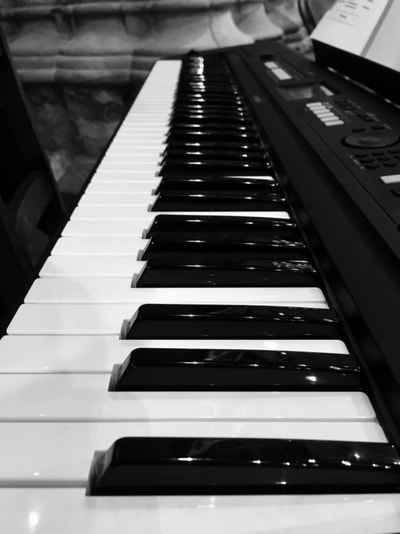 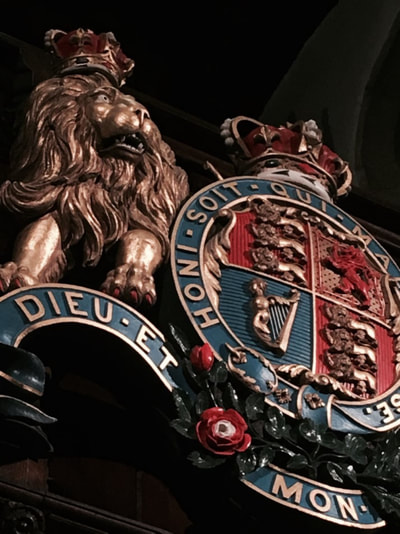 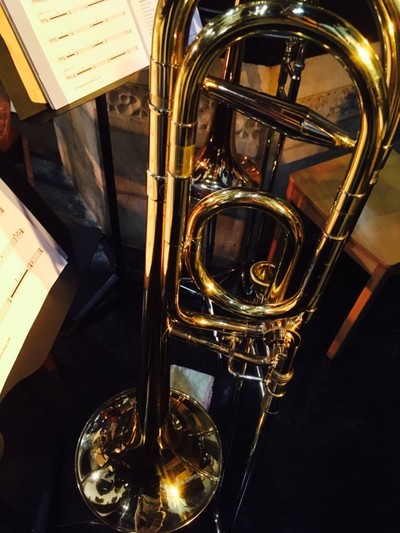