Nelson Mass​ - Joseph Haydn
​The Nelson Mass ('Mass In Time Of Fear') is arguably Haydn's most dramatic and exciting mass - famous for its striking scoring, fine fugal writing and the thrilling syncopated 'amens' building to a shattering climax. 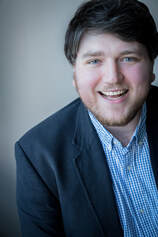 Aidan Edwards from Halifax, West Yorkshire, studied at the Royal Northern College of Music where he completed his BMus and Masters with Distinction under the tutelage of Matthew Best. During his time at the RNCM, Aidan performed the roles of Drebyednetsov (Paradise Moscow), Larry (Company), Bottom (A Midsummer Nights Dream) and Frank (Street Scene). In 2015 he was the winner of the Elizabeth Harwood Award.

In 2018 Aidan was a Young Artist and cover with Opera Holland Park for their production of La Traviata performing the role of Giorgio Germont. Aidan’s other operatic roles include Marcello (La Boheme), Eugene Onegin (Eugene Onegin) and Escamilo (Carmen) all with the Sheffield based Opera On Location. Abroad Aidan has sang Marco (Gianni Schicchi) in Nice and Germont (La Traviata) in La Rochelle.

Aidan has worked with Opera North as part of the chorus in their tour of The Ring Cycle conducted by Richard Farnes. This summer Aidan returned to work with Scottish Opera touring streamlined productions of The Magic Flute and Iolanthe. He also debuted with the National Gilbert and Sullivan Opera Company joining their chorus in two shows as well as principle roles in The Gondoliers and The Yeoman of the Guard as they toured the country between July and September. He was also a Lez Azuriales Young Artist in 2016.

Oratorio experience includes Messiah, Brahms Requiem, Faure Requiem, Israel in Egypt and Mozart’s Coronation Mass in C as well as being soloist in the UK Premier of Penderecki’s Seven Gates Of Jerusalem performed at the Bridgewater Hall, Manchester in 2016.

A keen recitalist, Aidan works with Soprano Juliet Montgomery as the two perform a varied concert of Opera and Musical Theatre up and down the country, the highlight being an annual slot at the Edinburgh Arts Festival where they have sung since 2013.

Aidan Edwards appears by kind permission of the RNCM.
​

Philip O’Connor  - Tenor
Philip’s main musical education began at Wells Cathedral School. Subsequently, Philip then worked at Hereford Cathedral, culminating in the Three Choirs Festival at Gloucester in 2013. In 2016, Philip graduated from Manchester University gaining a 1st in Solo Performance under Andrew Heggie. Since his arrival in Manchester he has been the Decani Tenor at Manchester Cathedral with whom he has sung many live broadcasts, most recently the 100th Anniversary of the Battle of the Somme.

Philip is currently in his second year of his MMus being taught by Nicholas Powell. As well his studies, he is also a freelance performer and teacher in the Greater Manchester area and sings regularly with the BBC 4 Daily Service Singers. Recent highlights include the role of Laurie in Mark Adomo’s Little Women for RNCM Opera Scenes and the role of Tancredi in Monteverdi’s Combattimento di Tancredi e Clorinda. Philip will next perform the role of Le Remendado in Carmen with North Wales Opera. At the RNCM, Philip is generously supported by The Garner Howard Award and the Mario Lanza Foundation.
​
Philip O’Connor appears by kind permission of the RNCM.

Click the "Where Can We Go" link below for details of other events within 10 miles of Lancaster
or use the optional full search facility across the United Kingdom.
​